Home — Sports Betting News — What a Drama! Barcelona is about to Sell Ousmane Dembélé to Manchester United despite His Wish to Stay in the FC

What a Drama! Barcelona is about to Sell Ousmane Dembélé to Manchester United despite His Wish to Stay in the FC 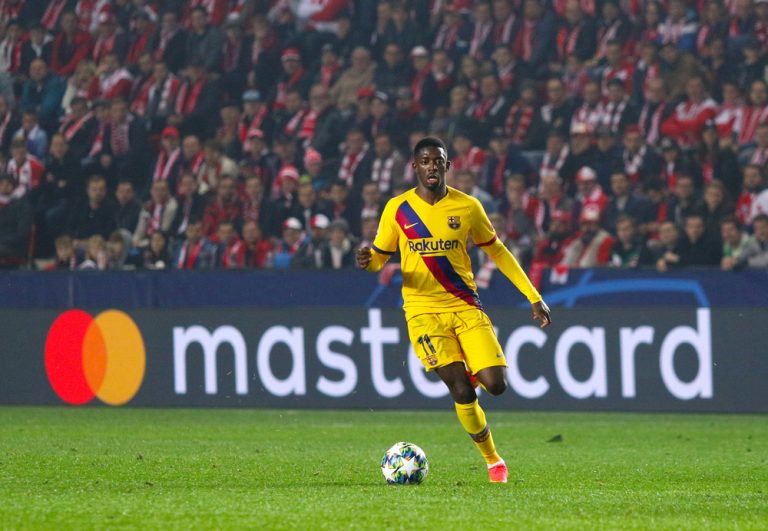 It seems like the Barca star Ousmane Dembélé can change the club in the nearest future. The Spanish FC considers the possibility of giving Dembélé on loan to Manchester United despite the player’s desire to stay in the home club.

The French footballer Ousmane Dembélé may not play in the current season within the Barcelona roster. According to reports, the club bosses seriously took Manchester United’s offer to get Ousmane on loan for the regular season with the following buying the next summer.

Barca reps didn’t reveal the exact sum that United offered for Dembélé, but according to the insider’s information, the sale is worth €60M.  If the deal with a prospect to buy occurs, the English FC will have to reimburse Ousmane’s fixed salary at full.

Barca’s manager Ronald Koeman explained that the negotiations are still underway and added that the final decision would depend on the club bosses and Dembélé himself. Koeman stressed that he personally likes Ousmane’s progress in Barcelona and sees excellent prospects for the young player.

“I like how he trains… Ousmane showed a great play in the pre-season, and I count on him. Whatever the decision will be, it’s upon the FC and the player.”

The fans that follow Dembélé’s career path doubt that the star will accept the offer. A few months ago, the Frenchman rejected the loan deal with Liverpool, stating that he wishes to continue playing for Barca. For the report, the young star joined the Spaniards in 2017. Previously, he ran for the French national team, and for one year, he was a forward of the German club Borussia Dortmund. Ousmane left the Germans after a one-year deal to join Barca.

United reportedly started showing interest in the Barca’s forward after failing to get Jadon Sancho to the club. Sancho currently plays for Borussia, which agreed to sell the player for a €120M loan contract. Obviously, the sum was too-much for Manchester, and they started searching for less expensive alternatives.

Manchester executives have lately taken a somewhat active position, considering the roster changes. Recently, we wrote that the FC signed Donny van de Beek, whose contact with Ajax came to an end in summer. United gave €40M for the Dutch footballer. The same year, the club prolonged the loan contract with the Nigerian star Odion Ighalo. He will continue to compete for the Spaniards till February.

For the record, Ousmane Dembélé joined Barca at the moment when Neymar left the FC in 2017. At that time, the club bosses looked for the new prosperous athletes as Neymar’s replacement and saw the French player’s potential perspective. As for Neymar, he signed a profitable deal with PSG, where he plays by now.

As for Ousmane Dembélé, it was uncovered that he continues training in the Spanish club. The star refuses to shed light on his future plans, but fans have no doubts that Ousmane will keep showing fantastic performance on the field, no matter whether he stays with the Spaniards or transfers to the Brits.