UEFA European Championship, or simply Euro, is the major summer’s European championship. It is traditionally held once in four years, and the upcoming 2021 year’s competition is the first Euro contest in the whole history that was postponed. As the event will occur during the Covid-19 pandemic, it will have particular rules and a new format, with fewer viewers on the stadiums and the help of new systems like the video assistant referees. For marketing purposes, the name Euro 2020 was not changed so that you can meet this title in many sports magazines and sportsbooks.

Like in Euro 2016, there will be 24 teams in the contest, chosen according to the results of the Euro 2020 qualifying. The main event will take place from June 11 to July 11; the exact schedule of the event is the following:

Leo Vegas is a new sportsbook, released in 2018. It is a legit bookmaker, officially licensed by the two top-tier gambling commissions: Malta Egaming Committee and the UK Gambling Commission. It means much for sports bettors in terms of their experience’s safety so that we can rate Leo Vegas as a trusted sportsbook. Besides, Leo Vegas offers quite a generous choice of available banking methods:

It is one of the top solutions for mobile bettors: this gambling platform started with a mobile app, which is the same as comprehensive as the desktop site. 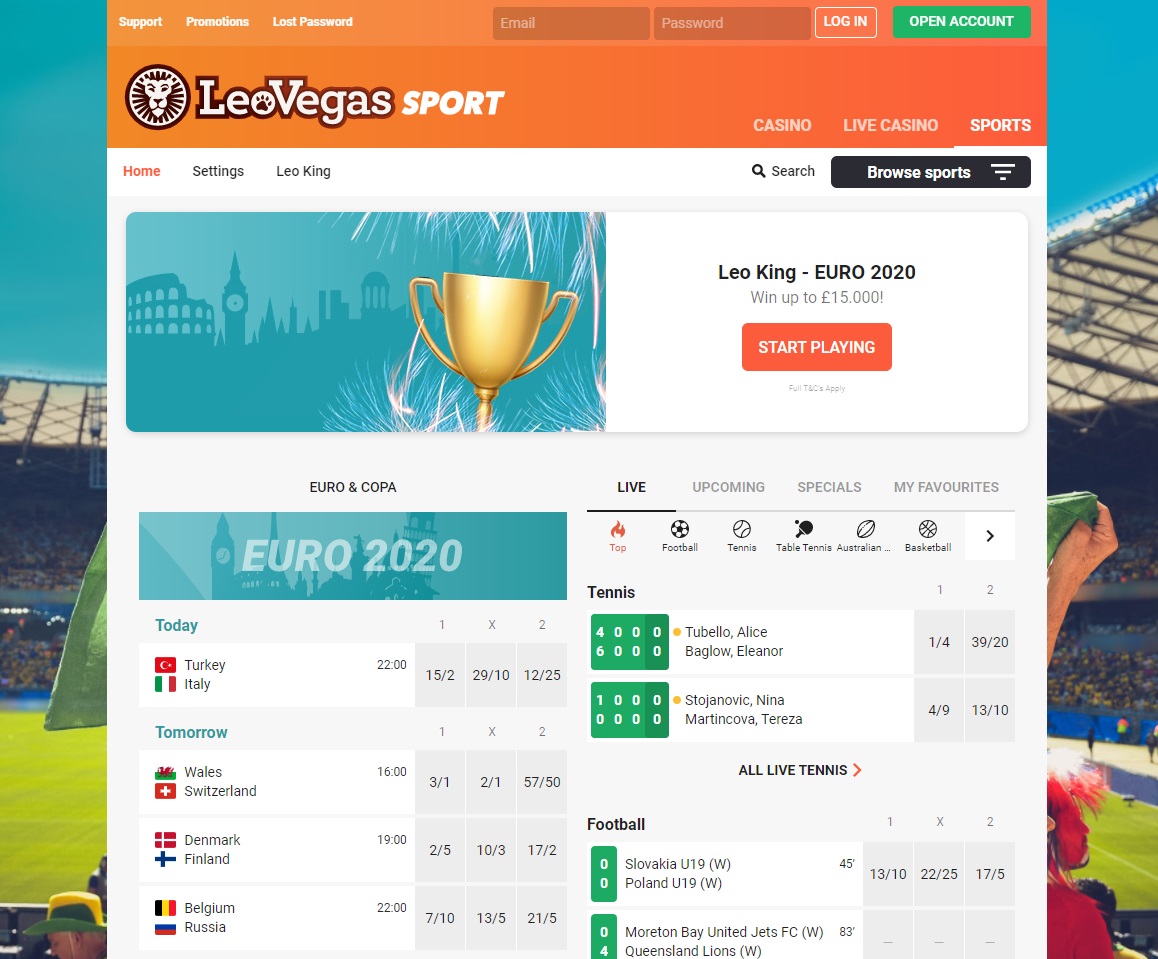 Leo Vegas’s welcome bonus consists of the four matches to the first four initial deposits: up to $200 for the first deposit, $500 for the next two, and $400 for the fourth.

Besides, you get 25 free spins for each of these deposits; regular customers can also claim free bets promotions.

Overall, it is a decent platform with comprehensive coverage of various sports and a vast casino library. It is also an excellent place to find multiple betting odds for in-play markets, but they do not feature a live streaming function. The soccer coverage is very comprehensive, and it is possible to find reduced juice for Euro semi-finals and finals.

Bet365 Group Ltd is a well-established company offering sports betting and casino services for gamblers worldwide. The head office is located in Great Britain, but they operate globally thanks to the range of top-tier licenses they got from the following organs: 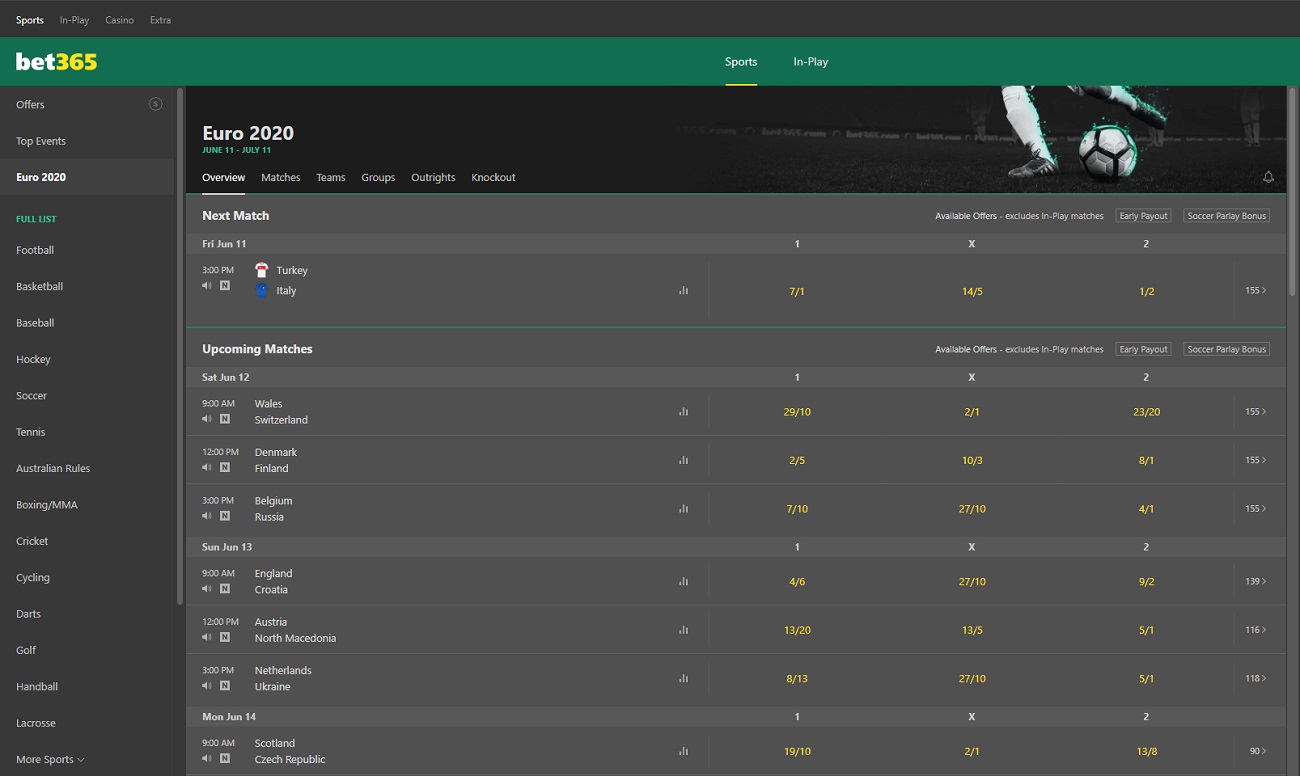 Bet365 is generous in terms of payment methods; you can deposit and withdraw with the same options:

The new customers receive £100 in free bet credited after the member makes their first deposit of at least £5.

Bet365 is a trusted and secure sportsbook with in-depth soccer coverage and options for other sports and non-sporting events. They feature fast payouts, and we have found no customer complaints related to any withdrawal delays or frauds. Besides, their margin is usually less than the average, so we find it a decent place for wagering on sports.

888Sport is a European bookmaker with a reputation as a fair and multifarious sports betting platform, with a wide selection of markets and competitive odds. It is the UKGC, Malta, and Gibraltar commissioner which allows them to operate legally in most European countries and worldwide. They accept several most popular banking methods, including credit cards and e-wallets:

Their welcome bonus of €30 for free bet stakes (after a deposit of at least €10) is not the most lucrative on the market, but they compensate for it by having in-depth coverage of multiple popular and niche sports and non-sports events. 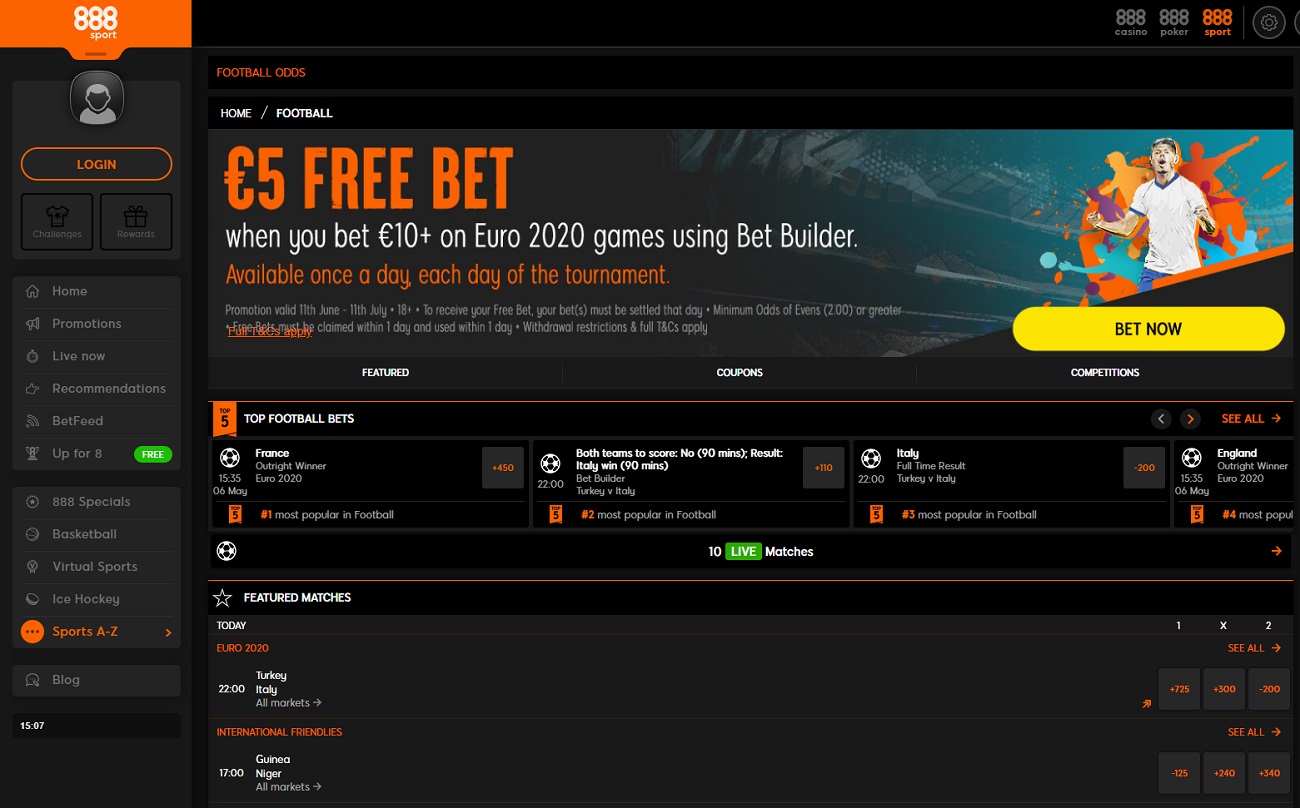 888Sport is a decent platform with a comprehensive website layout, fast payouts, professional and quick customer support; we have not found any evidence of fraudulent actions towards the customers and can rate 888sport as one of the top-tier European sportsbooks.

This is a sister site of LeoVegas Gaming Plc, a holder of Leo Vegas Sportsbook. This casino works exclusively for United Kingdom residents and has a license from the UK Gambling Commission. This a safe place to make bets or take part in casino activities. Another indication of a good betting site is a wide selection of payment methods; while 21.co.uk is not the most generous platform in this matter, you can still pick from several options, including credit cards, Neteller, Skrill, or PayPal. You can use either desktop or mobile versions of the site or download a native app.

There are two welcome bonuses: the first one is a £10 bonus in free bets credited right after creating an account.

Overall, it is a decent sportsbook and casino with a range of excellent promotions; being focused on a single country, 21.co.uk manages to fulfill the gamblers’ needs and pay much attention to customer service, technical nuances, and development. 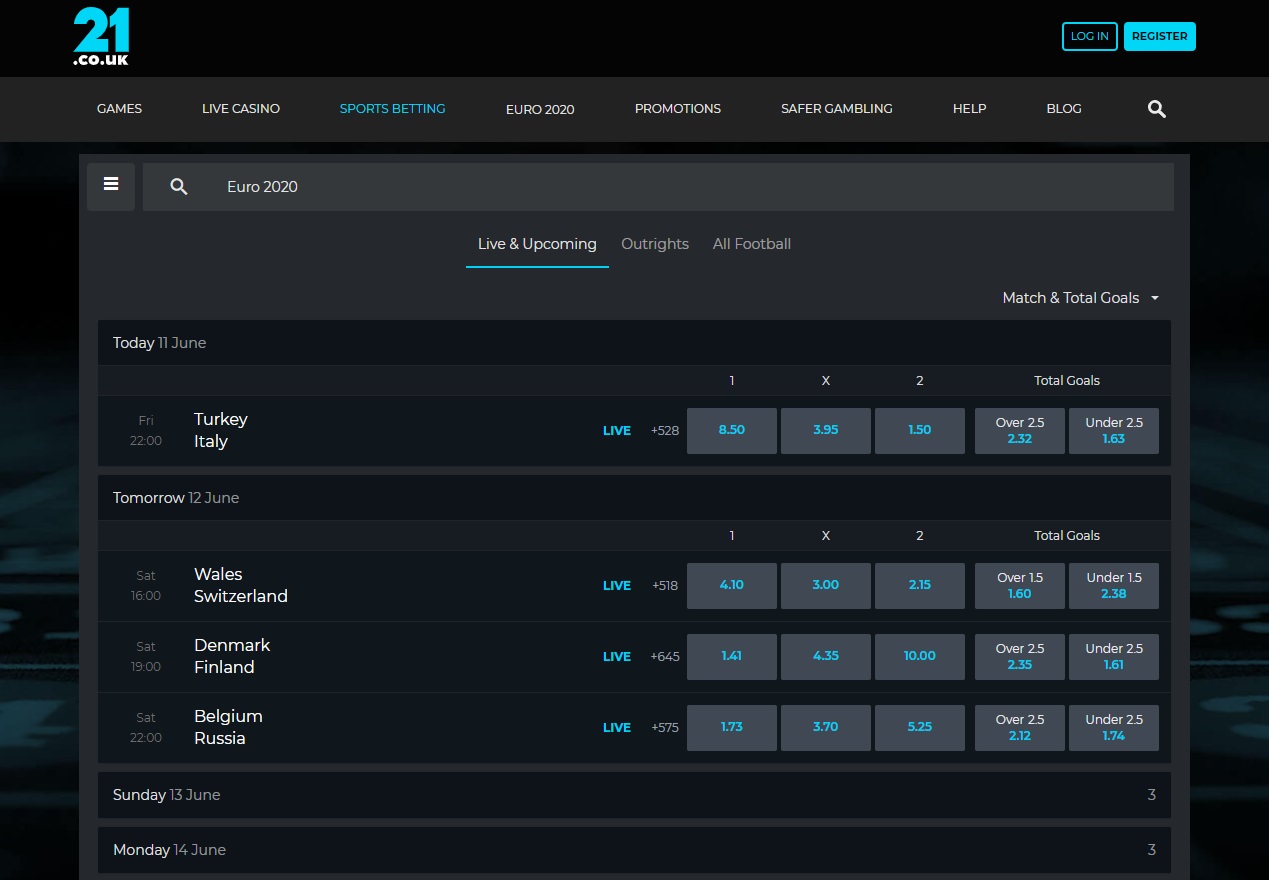 10bet has operated since 2003; it is a sports betting site, casino, and live casino platform primarily aimed at the British market. Its customer pool reaches approximately a million members, and we have no doubts about its reliability and fairness. One of the most important proofs of 10bet’s trustworthiness is their gambling license issued by the UKGC, the strictest gambling authority worldwide. Besides, they cooperate with many established banking systems:

Their welcome bonus is a £50 free bets credited after you make your first deposit; there are also more regular promotions for sports bettors.

10bet has a massive library of sports disciplines you can wager; there are always daily live events. They give the best odds and coverage for soccer and provide bettors with multiple props besides the typical Moneylines, Handicaps, Totals, and Futures. 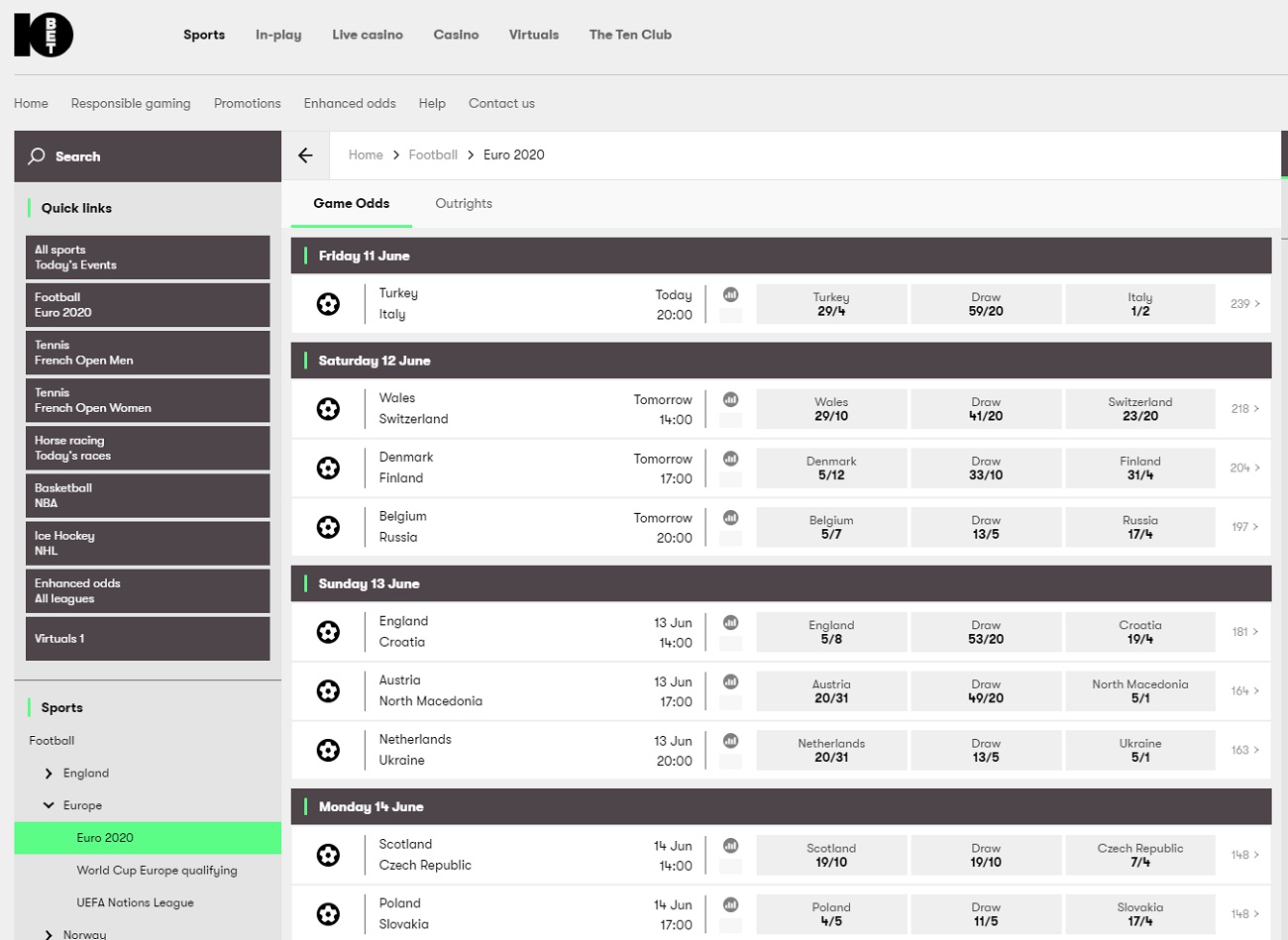 It is one of the top-ranked British sports betting providers and a website you can trust in terms of security and fast withdrawals.

In the table below, we will represent the outright winner bets and the list of all teams who took part in the qualifying stage of Euro that started in 2019 and ended in autumn 2020.

Euro 2021 was supposed to be a special event in UEFA history even before the Covid-19 pandemics crucially changed all plans.

It will be the first Euro championship that will take place in more than one or two countries but is spread around eleven countries, the national UEFA associations. The UEFA Committee made such a decision because Euro 2020 was supposed to be the 60th anniversary of the contest. 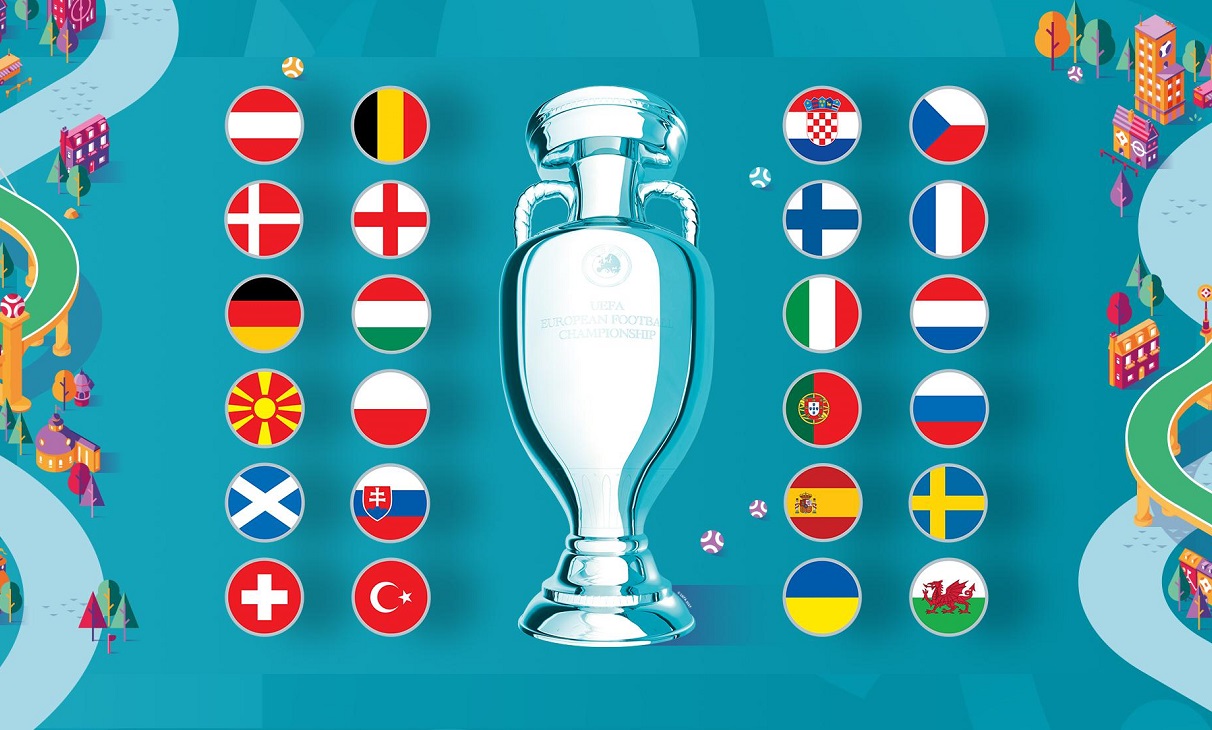 Just like the previous Euro championship, there will be 24 teams. As the tournament was postponed, and the pandemics’ safety measures prevented teams from regular training for some time, the championship outcomes became a bit vague and uncertain; besides, modern systems and new rules were embedded, so the whole event can turn out to be pretty unpredictable.

Bookmakers have already prepared their odds for the upcoming Euro championship, and the experts have already equipped their forecasts about the possible outcomes of the contest. Although most sports bettors put high hopes on world champions France, the FIFA-2018 outright winner, they did not show impressive results during the qualifying tournament. Let’s review a range of the most expected upcoming matches to analyze the possible game results.

While France still has big chances to appear in the Finals, their first performance that will be against Germany is not going to be smooth. They feature world-class players like Kilian Mbappe, Antoine Grizmann, and Olivier Giroud; the roster also includes great midfielders with Kante Lemar, Matuidi, and Sissoko. However, oddsmakers suppose the German team can turn out to be superior after Low picked Müller and Hummels and hired young players to create a balance between youth and experience.

The game takes place at the Russian home stadium. However, we doubt it will help them much. Belgium has already won Russia several times, and one of them was also a domestic game for Cherchesov’s team. Both have strong squads, but Russia may face issues to stand against Doku and Trossar.

This match opening Euro 2020 is one of the top anticipated events with controversial forecasts. Turkish squad’s leading forward dropped out due to a severe knee injury which is a significant loss for the team, as it seems that primary hopes were laid on him. However, two other vital players Yılmaz and Yazıci, have a chance to change the game. On the other hand, this is not the luckiest tournament bracket for Turkey, as Italy shows impressive results in home matches, so a possible outcome is Turkey to win with a minor margin. 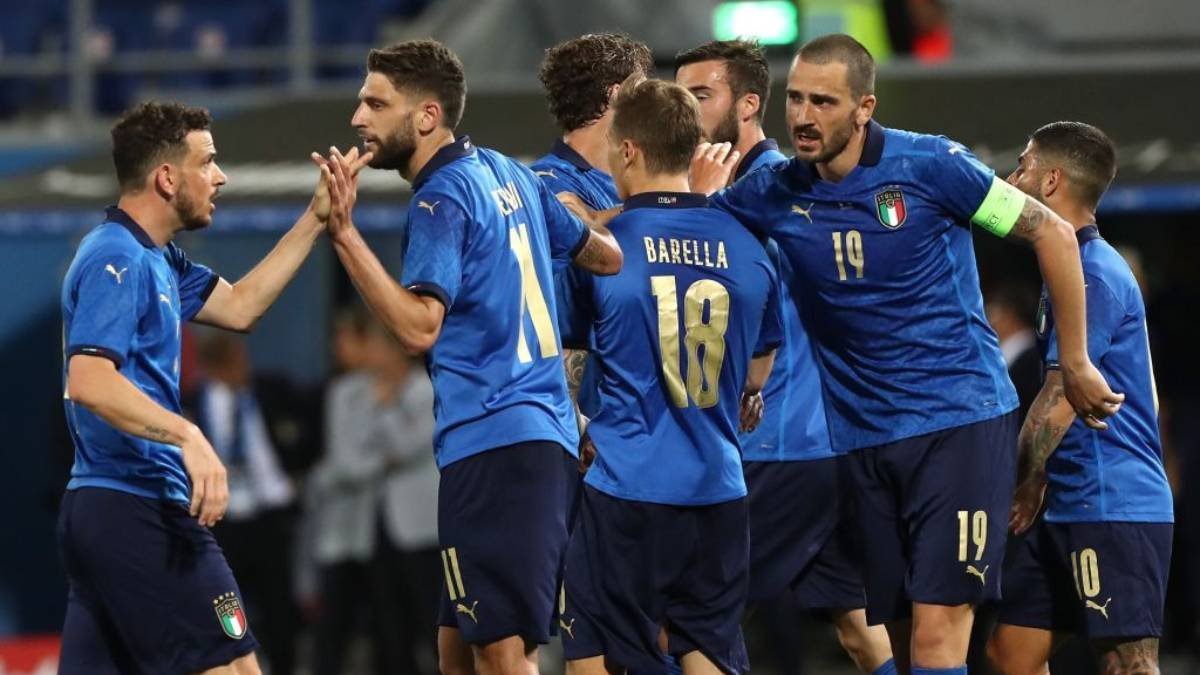 Italy is one of the top favorites for Euro 2020

The Netherlands vs. Austria

According to the latest statistics, the Dutch team performed better than Austria, but generally, their chances are more or less even. While Frank De Bour and his squad are the favorites of the upcoming match, they will not likely win at ease. If we look back to the qualifying tournaments, the Netherlands won six games out of eight, while Austria had three defeats of ten games. The straightforward matchup between two teams ended up in six wins of Dutch in a row in the recent games.

After both teams announced the rosters for Euro 2020, it became clear that we are going to watch an exciting encounter of Mbappe and Ronaldo, two world-class leading players; the other members of both squads are also superior, and the stats of both National teams show many ultimate winnings and overall excellent performance. France is an uncertain favorite for this game, according to the oddsmakers, but Portugal’s victory or the draw is also possible.

Portugal and Germany had only a few encounters, and even though Portugal’s rosters for Euro 2020 are more than superior, Germany is still a major favorite of the upcoming match. However, we expect at least one goal from Portugal, and a chance of a draw is also pretty high. 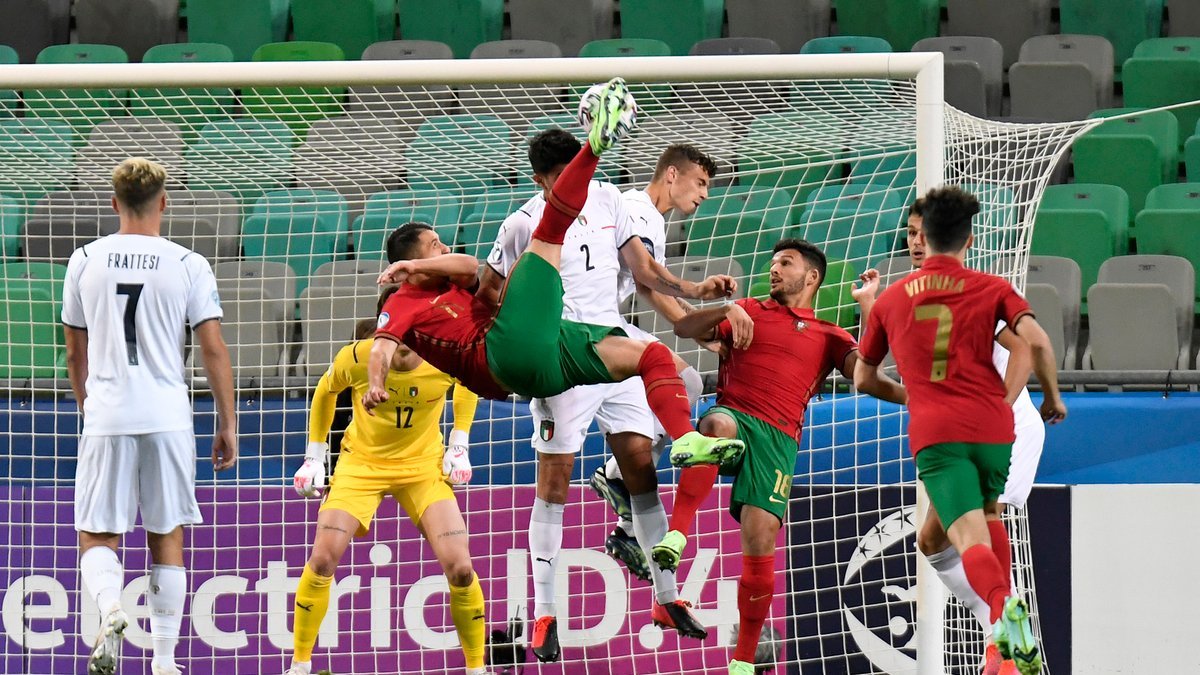 Portugal and Germany fall into the “group of death”, which includes Hungary and France

Italy’s squad is the strongest team of group A, and their game against Switzerland will be held in their domestic stadium in Rome, which also gives them a serious advantage. In the long-standing confrontation between Italy and Switzerland, the latter one has never managed to win. Although the Swiss team has shown decent results, oddsmakers are pretty sure they have little chance to win against Italy.

Turkey features a young but powerful team; they performed well during the qualifying stage; Switzerland’s squad consists of experienced strong players who reproved their skills in the latest games in the UEFA Nations League. It will be an exciting encounter, and we suppose it is possible that Turkey can win with a slight margin, and both teams might score at least once.

Football News - 16:23
Bradley Chubb is preparing for an ankle surgery: when can we expect him back on the field

Soccer News - 12:58
Ronaldo scores in every match for his new team, Messi is left behind

Football News - 16:17
Ryan Fitzpatrick went back on the surgery: shall we expect him on the field soon?

Bookmaker News - 12:57
Alexander Usyk vs. Antony Joshua: what can we expect from the September 26 night?

Soccer News - 16:24
The impact of Lionel Messi and Cristiano Ronaldo on La Liga

I’m a football betting fan. For a long time working with this, I can say that the site has a clear and useful structure that makes it possible to find information without any problems. The coefficients are quite high and most importantly profitable, which lead to a good profit. ...
Jeffrey
8.8/10

I can’t say that it was this bookmaker who hooked me with anything. If you compare it to others, it’s nothing new or unusual, so let’s talk about it as a separate bookmaker. Of the advantages, the simplest possible registration and functionality, that is, even an uprepared ...
Jull Burk
6.3/10

I’ve been betting here for several years. I started with small sums, because at first I learned this and did not want to risk large sums right away. Experience gradually increased, I learned a lot. Leon’s office was not let down in anything, they work without frames. The margin ...
Jeff Hunt
All reviews