Roma became the first-ever winner of the Conference League 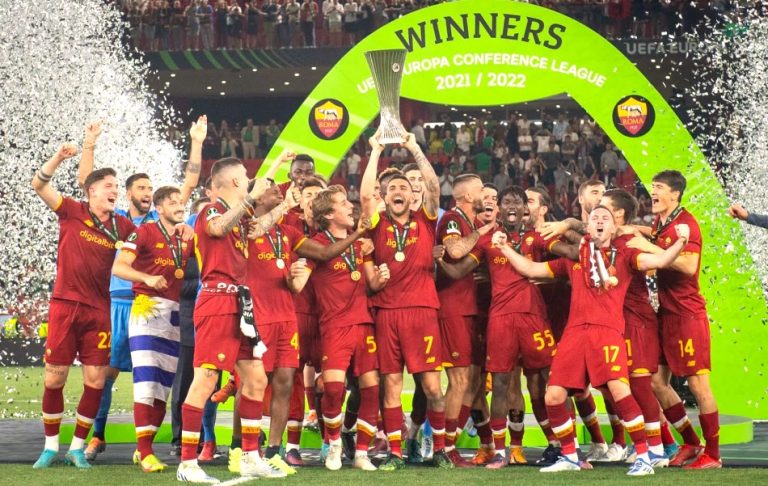 The Roman club defeated Feyenoord in the final of the tournament. This trophy was the first for Roma under the auspices of UEFA. Roma head coach Jose Mourinho won the UEFA Champions League, UEFA Europa League and UEFA Conference League for the first time in history.

AS Roma defeated Rotterdam’s Feyenoord in the Conference League final. The meeting took place in Tirana with a score of 1-0.

The only goal of the game was scored on 32 minutes by Nicolo Zaniolo through Gianluca Mancini.

Conference League is the third most important European league after the UEFA Champions League and UEFA Europa League. It is the first in history. “At the qualifying stage Roma beat Trabzonspor of Turkey on the sum of two matches. In the group stage, the Italian team with 13 points took first place in the quartet with Norway’s Bodo-Glimt, Luhansk Zorya and CSKA Sofia. In the playoffs, Roma passed Vitesse, Bodo-Glimt and Leicester City.

Feyenoord’s path to the tournament was longer. The team from Rotterdam made it through three qualifying rounds, defeating Kosovo’s Drita, Switzerland’s Luzern and Sweden’s Elfsborg. In the group stage, Feyenoord finished first in a quartet with 14 points against Slavia Prague, Union Berlin and Maccabi Haifa. In the playoffs, Rotterdam beat Partizan Belgrade, Slavia and Olympique Marseille on their way to the final.